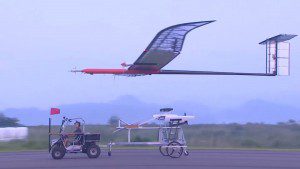 KARI’s EAV-3 takes off from its trailer while being pulled down the runway at an airport in southern Korea. (Credit: Business Korea)UAV

On Aug. 11, 2015, the Korea Aerospace Research Institute (KARI) announced that its EAV-3, a high-altitude UAV powered by solar cells, succeeded in flying into Earth’s stratosphere at 14 kilometers above sea level during its nine-hour flight. At such altitude, air density amounts to 53 percent of that contained at 10 kilometers, a common altitude for civilian aircraft, and the temperature is 30 degrees lower. However, the lack of clouds favors sunlight as an energy source.

EAV-3 is a 100-percent pollution-free aircraft that uses solar cells and secondary cells as energy sources in the stratosphere. A mono-crystal solar cell on top of the wing continually charges a secondary cell during flight, which is used as a source of energy. Wings are 20 meters long and weigh 53 kilograms.

“We are planning to acquire tech for solar-powered UAVs capable of remaining in the air at high altitudes for a long period of time to carry out tasks like terrestrial observations, meteorological observations and telecommunications relays, while remaining in the air for several weeks to months in the stratosphere,” said Kim Seung-ho and Go Jung-ik, heads of the research team.