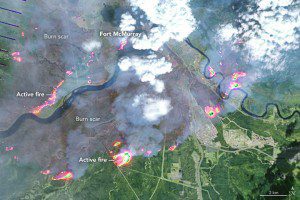 An image acquired by the Enhanced Thematic Mapper Plus (ETM+) on the Landsat 7 satellite shows Fort McMurray on May 4, 2016. This false-color image combines shortwave-infrared, near-infrared and green light (bands 5-4-2). On this day, the fire spanned about 100 square kilometers; by the morning of May 5, it spanned about 850 square kilometers. Also visible in the image is the fire's complex pattern, with many active fronts. (Credit: NASA)

In early May 2016, a destructive wildfire burned through Canada's Fort McMurray in the Northern Alberta region, forcing the evacuation of more than 80,000 people. Windy, dry and unseasonably hot conditions set the stage for the fire. Winds gusted more than 20 miles per hour, fanning the flames in an area where rainfall totals have been well below normal in 2016.

Satellite observations detected the area's unusual heat. For example, a temperature anomaly map was based on data from the Moderate Resolution Imaging Spectroradiometer (MODIS) on NASA's Terra satellite. The intense heat coincided with a weather pattern called an omega block, where a large area of high pressure stalled the usual progression of storms from west to east. In Alberta, that left sinking, hot air parked over the region while the block was in place. According to Robert Field, a Columbia University scientist based at NASA's Goddard Institute for Space Studies, El NiÃ±o likely also played a role in the warmth.

There can be bigger fires, but, in Alberta at least, rarely are they so close to so many people, noted Field.