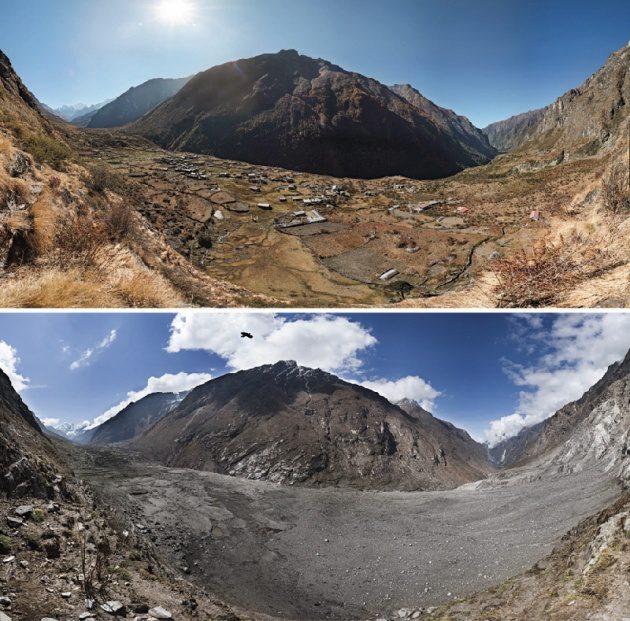 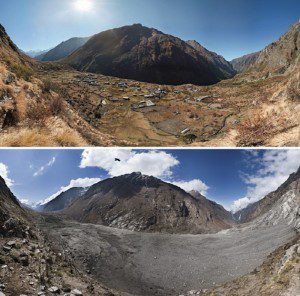 Photographs of Nepal’s Lantang Valley in 2012 (above) and 2015 (below) demonstrate the effects of one of the landslides caused by the April 2015 earthquake. (Credit: David Breashears/GlacierWorks)

Scientists with the Global Land Ice Measurements from Space (GLIMS) network, an international consortium of glaciologists, used satellite imagery to search for landslides after the April 25, 2015, earthquake that claimed more than 9,000 lives in four countries, primarily Nepal.

According to their research published in a recent report, fewer landslides than expected resulted from the massive magnitude 7.8 earthquake. In addition, no large floods from overflowing glacial lakes occurred.

“As horrific as this was, the situation could have been far worse for an earthquake of this magnitude,” said lead author of the study Jeffrey Kargel, senior associate research scientist in the University of Arizona Department of Hydrology and Water Resources, and GLIMS leader.

Kargel, GLIMS scientists and others joined with the NASA Applied Sciences Disasters group to use remote sensing to help document damage and identify areas of need. The international group of scientists requested that several satellites take images of the region to enable the systematic mapping of landslides.

More than 10 satellites from four countries provided images and other data, allowing volunteer analysts to map and report the various geological hazards, including landslides, that resulted from the earthquake.

The 4,312 landslides that happened within six weeks after the quake were far fewer than occurred after similar-magnitude quakes in other mountainous areas. The team also surveyed 491 glacial lakes and saw only nine that were affected by landslides. Satellite images revealed no flooding from those lakes.