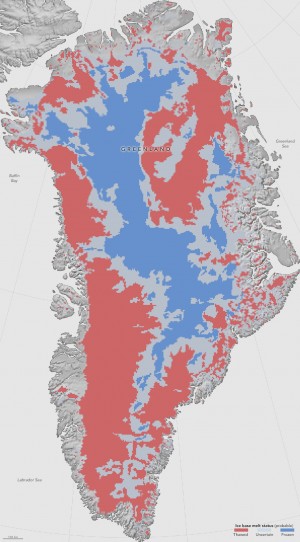 A map showing which parts of the bottom of the Greenland Ice Sheet are likely thawed (red), frozen (blue) or still uncertain (gray) will help scientists better predict how the ice will flow in a warming climate. (Credit: NASA Earth Observatory/Jesse Allen)

Greenland's thick ice sheet insulates the bedrock below from the cold temperatures at the surface, so the bottom of the ice often is tens of degrees warmer than at the top. Knowing whether Greenland's ice lies on wet, slippery ground or is anchored to dry, frozen bedrock is essential for predicting how the ice will flow in the future, but scientists have few direct observations of the thermal conditions beneath the ice sheet, obtained through fewer than two dozen boreholes that reached the bottom.

A new NASA study, however, synthesizes several methods to infer whether the bottom of the ice is melted or not, leading to the first map that identifies frozen and thawed areas across the whole ice sheet. The team examined results from eight recent computer models; studied the layers that compose the ice sheet itself, which are detected by radars onboard NASA's Operation IceBridge aircraft; looked at where the ice surface speed measured by satellites exceeds the maximum velocity at which the ice could flow and still be frozen to the rock beneath it; and studied imagery from the Moderate Resolution Imaging Spectroradiometers on the NASA Terra and Aqua satellites, looking for rugged surface terrain usually indicative of ice sliding over a thawed bed.