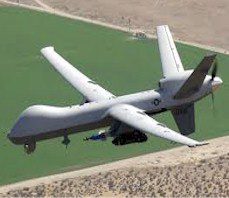 Oklahoma is a primary U.S. center for drone development.

Oklahoma state officials are currently pushing for an unmanned aerial drones corridor, which would stretch for approximately 80 miles between Fort Sill and the town of Clinton, to be approved by the Federal Aviation Administration (FAA).

If approved, the air corridor would be the first civil airspace in the country where unmanned aircraft could be flown without prior FAA permission.

Oklahoma is already one of the nation’s primary centers for drone development; the proposed air corridor is expected to spur business development and encourage relocation of existing projects.

Oklahoma State University’s Mulitspectral Laboratory, which develops unmanned aerial vehicle (UAV) technologies and maintains close ties to defense contractors, already has an agreement with the military to fly drone aircraft over portions of Fort Sill’s airspace at a height of up 40,000 feet.

An airport serving only unmanned vehicles opened at Fort Sill in 2006; no manned civilian or military flights use the airspace allotted for the proposed corridor.

“Currently, companies such as DII that are in involved in the development of unmanned and remotely piloted aircraft are prohibited from operating in the National Airspace System (NAS),” Grimsley said. “This inhibits our ability to develop commercial applications for our technology. To fully realize the potential of unmanned aerial systems—especially for commercial applications—access to test ranges such as the proposed Oklahoma air corridor is vital.

“The proposed air corridor will enable more research and testing activity to demonstrate that unmanned aircraft can be operated safely in the NAS and to also enable the continued development of technology to improve the safety of all types of aviation—both manned and unmanned. I believe the proposed corridor will be important for the FAA as well.”

There are longstanding ties between Oklahoma’s state government, the drone community, the federal government and defense contractors. Multispectral Lab Executive Director Stephen McKeever doubles as the state secretary of Science and Technology, and the opening of the UAV airport at Fort Sill has contributed to a burgeoning aerospace industry specializing in drones.

The Multispectral Lab was reportedly primarily responsible for the opening of the Fort Sill airport, and Oklahoma State University recently signed a lucrative deal to engage in UAV research on behalf of the FAA.

However, operating privately developed aerial drones is still difficult for industry—even in a state with copious available airspace such as Oklahoma. According to the Joint Planning and Development Office, integration of privately owned drones into the NAS is restricted, because the NAS is tailored to accommodate manned aircraft.

By 2018, aerospace analysts The Teal Group expect that 15,000 unmanned aerial vehicles will be in use inside the United States, which is nearly half of the total worldwide. Aviation observers expect the drones to be deployed under a variety of circumstances—some are being tested for deployments in U.S. arenas of war abroad, others are used by federal and state law enforcement agencies as surveillance aircraft.

Story by Neal Ungerleider, a New York-based journalist who writes for Talking Points Memo (TPM) on the intersection of technology and policy. Story courtesy of TPM.