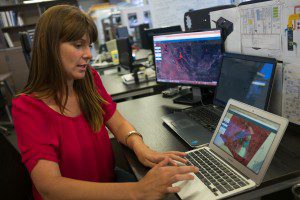 Aquila Space is building briefcase-sized satellites that can capture and send back images of more than 12 million square miles of Earth daily. Meanwhile, its Silicon Valley partner Astro Digital is developing software that allows anyone to process and analyze the data.

Aquila Space plans to launch four satellites in 2016 and another 12 in 2017. In addition to typical applications such as weather analysis and crop monitoring, the technologies are being looked at for ecological disasters such as earthquakes, droughts, floods and fires.

Aquila generally can’t photograph Earth with as much detail as larger government or commercial satellites, but by launching a greater number of small satellites, it believes it can offer faster and more-frequent updates. The higher temporal resolution could offer closer to real-time views of conditions on the ground, potentially helping to spot shifts in fire direction, better allocate firefighting resources, plan evacuation routes and more, according to Bronwyn Agrios, co-founder of Astro Digital.

Sean Triplett, who oversees geospatial programs for the U.S. Forest Service Fire & Aviation Program, said he’s following the space closely and is eager to see how satellite constellations and other emerging tools such as Unmanned Aircraft Systems can help agencies prevent or respond to wildfires.

“Any time new intelligence becomes available, it’s definitely something we want to look at and explore,” he said. “It’s a capacity we haven’t had before, and the people on the ground will take it in a direction we never thought of.”