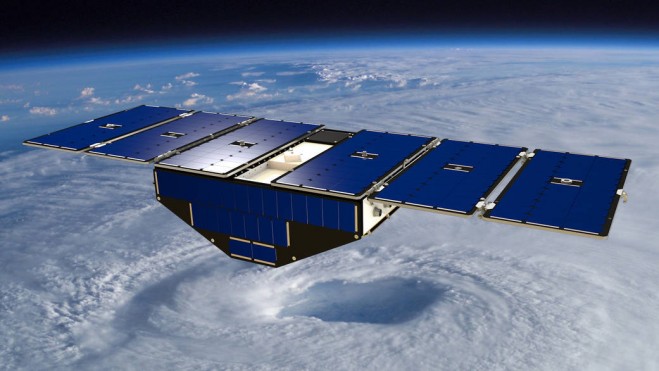 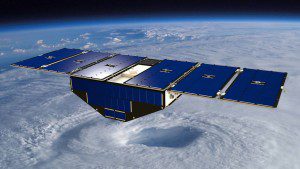 An artist’s concept shows one of eight CYGNSS satellites deployed in space above a hurricane.

Ten years after Hurricane Katrina formed in the Atlantic Ocean, construction of NASA’s next-generation hurricane-observing satellite mission is underway. NASA’s Cyclone Global Navigation Satellite System (CYGNSS), a constellation of eight microsatellites, will improve hurricane forecasting by measuring ocean surface winds in and near the eye wall of tropical cyclones, typhoons and hurricanes throughout their lifecycle.

CYGNSS will allow scientists to frequently probe the inner core of hurricanes from space, using direct and reflected signals from existing GPS satellites to obtain estimates of surface wind speeds over the ocean. These measurements will advance forecasting methods by providing data that can lead to better predictions of hurricane tracks, intensities and storm surges.

As CYGNSS and GPS satellites circle Earth, their interaction will provide a new image of wind speeds over the entire tropics every few hours, whereas a single satellite supplies a new image every few days. The ability to better monitor and predict the rapid changes in hurricane intensity, such as those observed with Hurricane Katrina, is critical to hurricane forecasters and U.S. coastal communities.

So far, the CYGNSS mission successfully passed two major NASA reviews, clearing the way for integration, testing and preparation of the microsatellites for flight.