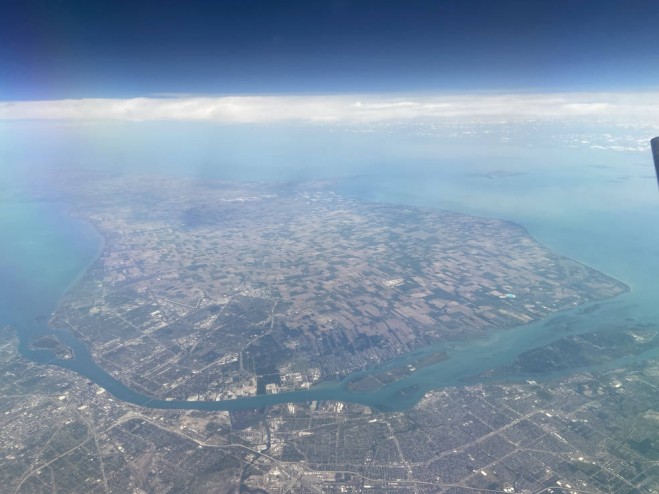 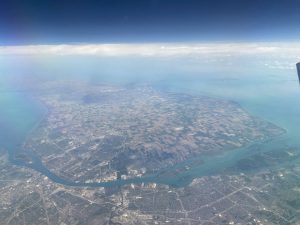 A view of the MOOSE study region from the Langley C-20B Gulfstream III. On the far side is the city of Windsor in Ontario, Canada. Detroit is in the foreground, with downtown Detroit on the lower left. The Detroit River runs between the two cities. (Credit: NASA/Kenny Christian)

Scientists are flying an airborne campaign out of NASA’s Langley Research Center in Hampton, Va., to contribute to a joint U.S.-Canadian study on air quality in a region with high surface ozone levels.

A community-organized effort led by the Michigan Department of Environment, Great Lakes, and Energy named Michigan Ontario Ozone Source Experiment (MOOSE) is targeting the border region that’s home to Detroit on the U.S. side and Windsor, Ontario, in Canada. The southeast Michigan region has ozone levels higher than the U.S. federal standard, and elevated ozone also exists across the border in southern Ontario.

High surface ozone levels are harmful to human health, especially in children, older adults and people with asthma. They tend to occur near urban regions in the summer months with high temperatures and strong sunlight, which both accelerate ozone formation. This issue is more complex when emissions occur near large water bodies where pollutants can be trapped near the surface and then are transported by breezes that result from the large temperature differences between water and land. Detroit and Windsor are separated by the Detroit River, which runs between Lake St. Clair to the north and Lake Erie to the south.

The MOOSE study includes partners from a number of agencies, both state and federal, as well as organizations and academic institutes from both the United States and Canada. Measurements will be taken on land and in the air. Scientists hope to better characterize causes of elevated ozone levels in the region, the strength of emissions from sources such as vehicular traffic, power plants and other industrial processes burning fossil fuels, which all will help identify potential strategies for improving ozone air quality.