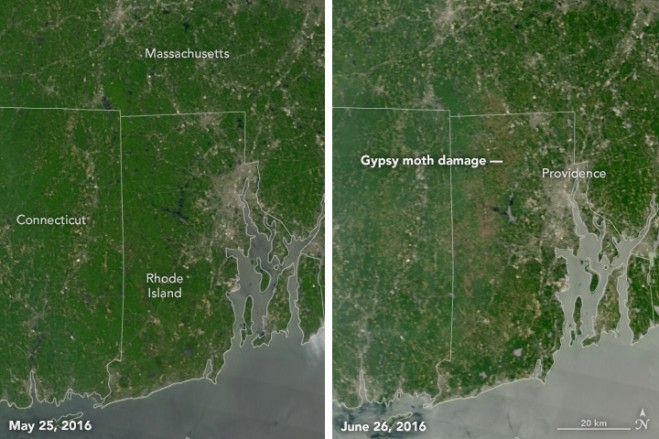 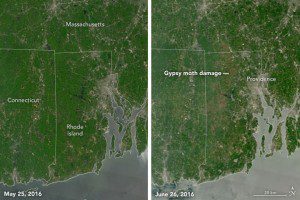 Although the headline conjures images of Mothra from the old Godzilla movies, the destructive insects in this care are the European gypsy moth caterpillar, which is experiencing a population boom and chewing through large swaths of hardwood forest in New England and the Mid-Atlantic. The outbreak of the fuzzy brown caterpillars was so severe that defoliation was apparent in satellite imagery collected by NASA’s Aqua and Terra satellites.

Gypsy moths have been a constant presence in the northeastern United States since being introduced from Europe in the 1860s, but their populations swell dramatically in certain years due to several environmental factors.

“This 2016 outbreak is likely due to two successive dry springs—conditions not conducive to the growth and spread of two naturally occurring bio-controls,” explained Paul Ricard, the forest health program coordinator for the Rhode Island Department of Environmental Management.

Deciduous trees can normally withstand one or two years of defoliation by caterpillars, but three or more successive years of severe defoliation can result in widespread tree mortality. Meanwhile, predators of the caterpillars—such as cuckoos, blue jays and orioles—often thrive when populations of gypsy moth caterpillars swell.

“Though weak or sick trees could succumb, we are not worried about significant tree mortality yet,” added Ricard.