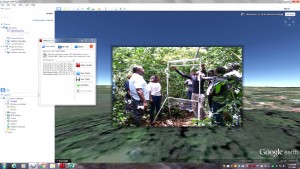 MediaMapper Mobile from Red Hen Systems is being used to photograph, geotag, save and share data (via Google Earth in this image) on Ugandan bats.

The effort is being led by Rebekah Kading, assistant professor in Microbiology, Immunology and Pathology, College of Veterinary Medicine and Biomedical Sciences, CSU, and will take place near Entebbe and Sipi, Uganda, near the Kenyan border.

The team is using Red Hen Systems' MediaMapper Mobile App for Android, which will categorize the locations of the bats and annotate where they were captured. The app also will geotag a photo or video and save it, along with typed and voice notes, that will later be mapped and viewed using Red Hen Systems' isWhere for Google Earth.

The research findings will be presented to CSU, CDC and DTRA to provide biosurveillance training to Ugandan partners as well as support bat biology and ecology research in Uganda.