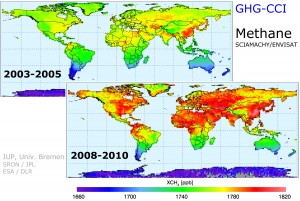 Maps show atmospheric levels of methane from 2003-2005 and 2008-2010, showing increased concentrations in the latter dataset (in red). (Credit: IUP, University of Bremen/SRON/JPL/ESA/DLR)

Satellite readings show that atmospheric methane and carbon dioxide are continuing to increase despite global efforts to reduce emissions. Methane concentrations were somewhat constant until 2007, but since then have increased about 0.3 percent per year, whereas global carbon dioxide levels continue to rise at about 0.5 percent per year.

The results, presented at the Living Planet Symposium in Prague, combine data from the European Space Agency's Envisat satellite and Japan's GoSat mission. The upcoming Sentinel-5P mission for Europe's Copernicus program is set to continue data collection on methane and other components of atmospheric chemistry by scanning the whole globe every day.

For the future, Sentinel-5P will be very important, in particular because of its very dense, high-resolution observations of atmospheric methane, which have the potential to detect and quantify the emissions of important methane-emission hotspots such as oil and gas fields, noted Michael Buchwitz from the Institute of Environmental Physics of the University of Bremen in Germany.

The atmospheric data products cover 2003-2014 and are available at http://www.esa-ghg-cci.org/.