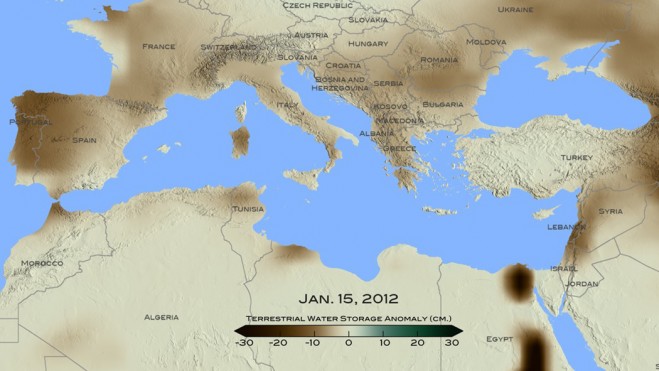 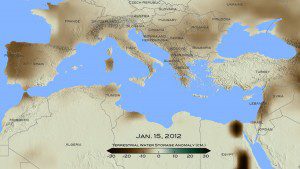 For January 2012, brown shades show the decrease in water storage (in centimeters) from the 2002-2015 average in the Mediterranean region. Data are from the Gravity Recovery and Climate Experiment (GRACE) satellites, a joint mission of NASA and the German space agency. (Credit: NASA/Goddard Scientific Visualization Studio)

A new NASA study used remote-sensing and tree-ring data to conclude that the recent drought that began in 1998 in the eastern Mediterranean Levant region (Cyprus, Israel, Jordan, Lebanon, Palestine, Syria and Turkey) is likely the worst drought of the last nine centuries.

In addition to identifying the driest years, the science team discovered patterns in the geographic distribution of droughts that provides a “fingerprint” for identifying the underlying causes. Together, these data show the range of natural variation in Mediterranean drought occurrence, which allows scientists to differentiate droughts made worse by human-induced global warming.

Between the years 1100-2012, the team found droughts in the tree-ring record that corresponded to those described in historical documents written at the time. According to Cook, the range of extreme wet or dry periods is quite broad, but the recent drought in the Levant region, from 1998-2012, stands out as about 50 percent drier than the driest period in the last 500 years, and 10-20 percent drier than the worst drought of the last 900 years.