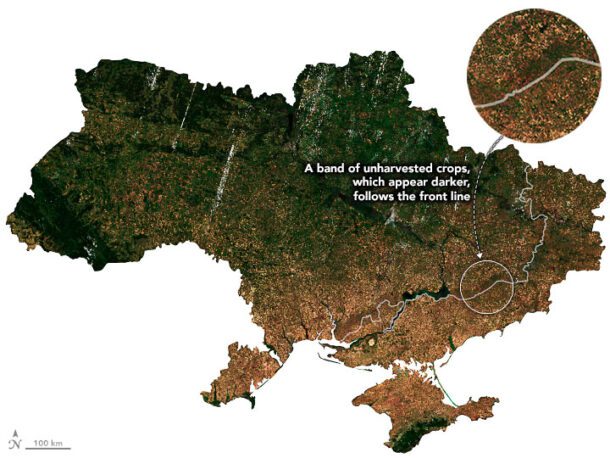 Russia's further invasion of Ukraine in February 2022 fueled widespread concern about the effects on the country's farming sector. In the early days of the crisis, food security specialists wondered if Ukrainian farmers would be able to harvest the wheat and barley they had planted the previous fall. They also worried that declining grain exports from Ukraine might throw global markets into turmoil and trigger food shortages continents away.

Now we are starting to get answers, said Inbal Becker-Reshef, director of the NASA Harvest program. Our satellite-based production numbers for the 2022 winter wheat crop in Ukraine make clear that farmers had a largely successful harvest.

The NASA Harvest team calculated that farmers harvested 26.6 million tons of wheat in 2022, several million tons higher than expected in leading forecasts. That's down from the previous year's record harvest of 33 million tons, but it's close to the five-year average of 27.9 million tons, Becker-Reshef added. However, Ukraine does not have access to 22 percent of that wheat in the eastern part of the country due to the war.

The NASA Harvest team used satellites to observe the areas that were left unharvested and found they were mainly concentrated along the front line. Wheat is largely harvested in mid-July. In the accompanying natural-color mosaic, based on imagery from Planet, unharvested wheat fields (dark brown) stand out compared to the harvested (light brown) fields to the north and south. The lighter brown color is a sign of leftover plant debris covering the fields after harvesting equipment has sheared the wheat and separated the valuable parts. The image is a biweekly composite, based on PlanetScope imagery collected between July 12-26, 2022, by Dove satellites.