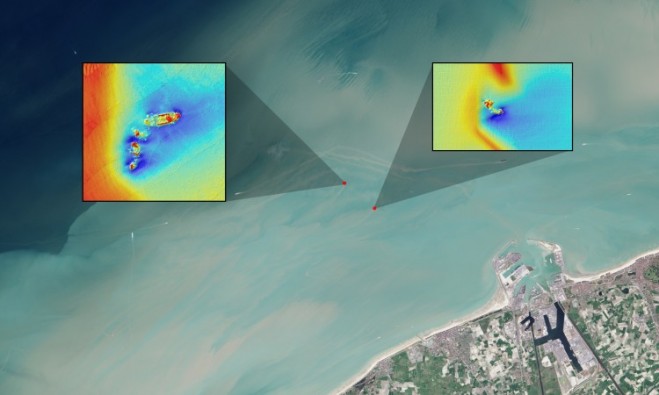 Using data from the NASA/USGS Landsat 8 satellite, researchers have detected sediment plumes extending as far as four kilometers downstream from shallow shipwreck sites, demonstrating how satellites may be used to locate the watery graves of coastal shipwrecks. The new study, conducted in a coastal area of Belgium, was published in the Journal of Archaeological Science.

The researchers started with the known locations of four fully submerged shipwrecks in their study site: the SS Sansip, which the authors explain was a 135-meter U.S. Liberty ship that sank after striking a mine in December 1944; the SS Samvurn, a similar ship that met the same fate the very next month; the SS Nippon, a ship that sank after a maritime collision in 1938; and the SS Neutron, a small 51-meter steel cargo vessel that fell victim to an uncharted navigation hazard, presumed to be the SS Sansip.

Using 21 Landsat 8 images and tidal models, the researchers mapped sediment plumes extending from the wreck locations. They found that the two ships with substantial portions of their structure unburied created sediment plumes that could be traced downstream during ebb and flood tides.