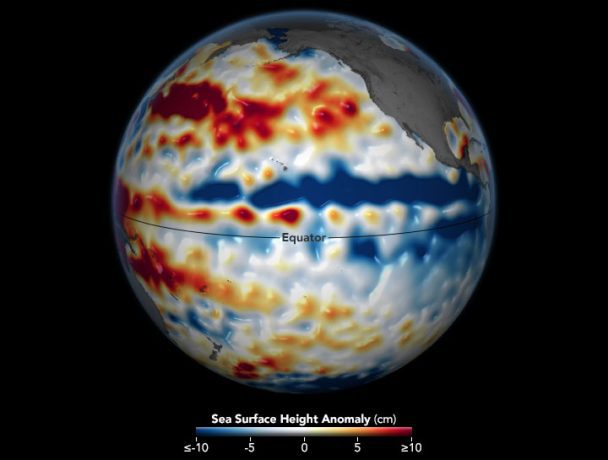 For the second year in a row, the cooler sister to El NiÃ±o showed up at the winter party in the Eastern Pacific. La NiÃ±a is expected to stick around until at least spring 2022 in the Northern Hemisphere.

Part of the El NiÃ±o-Southern Oscillation cycle, La NiÃ±a appears when energized easterly trade winds intensify the upwelling of cooler water from the depths of the eastern tropical Pacific, causing a large-scale cooling of the eastern and central Pacific ocean surface near the Equator. These stronger than usual trade winds also push the warm equatorial surface waters westward toward Asia and Australia. This dramatic cooling of the ocean's surface layers then affects the atmosphere by modifying the moisture content across the Pacific. This La NiÃ±a coupling of the atmosphere and ocean alters global atmospheric circulation and can cause shifts in the path of mid-latitude jet streams in ways that intensify rainfall in some regions and bring drought to others.

In the western Pacific, rainfall can increase dramatically over Indonesia and Australia during La NiÃ±a. Clouds and rainfall become more sporadic over the central and eastern Pacific Ocean, which can lead to dry conditions in Brazil, Argentina, and other parts of South America and wetter conditions over Central America. In North America, cooler and stormier conditions often set in across the Pacific Northwest, while weather typically becomes warmer and drier across the southern United States and northern Mexico.

The accompanying image shows conditions across the central and eastern Pacific Ocean as observed from Nov. 26 to Dec. 5, 2021, by the Sentinel-6 Michael Freilich satellite and analyzed by scientists at NASA's Jet Propulsion Laboratory (JPL). The globe depicts sea surface height anomalies. Shades of blue indicate sea levels that were lower than average; normal sea-level conditions appear white; and reds indicate areas where the ocean stood higher than normal. The expansion and contraction of the ocean surface is a good proxy for temperatures because warmer water expands to fill more volume, while cooler water contracts.