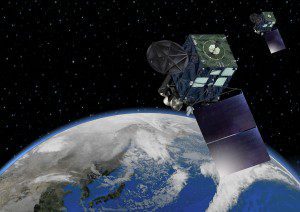 Japan's Himawari-8 weather satellite was launched on Oct. 7, 2014, and began operation on July 7, 2015. The satellite is in a geostationary orbit Â 22,000 miles from Earth, allowing for a full global view at twice the resolution of similar weather satellites.

The Japan Meteorological Agency (JMA) operates the next-generation weather satellite with a view 140 degrees east to cover the East Asia and Western Pacific regions. A satellite has been in this position since 1977 as a contributor to the World Weather Watch Programme. The latest satellite is a follow-on to the MTSAT series.

The optical imager acquires a full-globe image every 10 minutes, and the satellite takes 144 whole-planet photographs every day. The images illustrate how weather systems evolve and help forecasters fine-tune their models of Earth's atmosphere.

NOAA and NASA's GOES-R satellite is a similar advanced system that will launch in March 2016, providing a view over the eastern Pacific and Caribbean to track weather systems moving toward the United States.