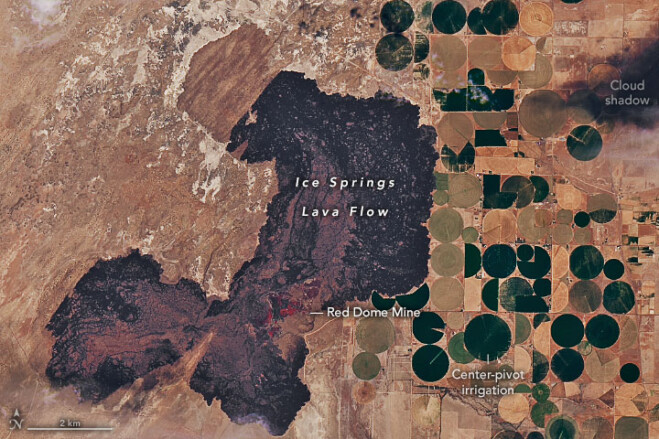 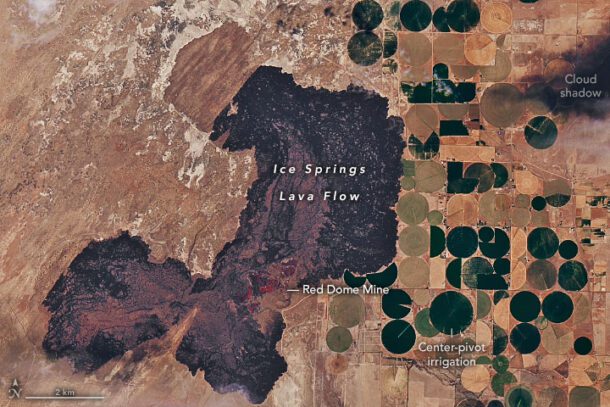 The Ice Springs lava flow lies about 10 miles (16 kilometers) west of the town of Fillmore, Utah, in the Black Rock Desert. It was named for the icehouse conditions found within its natural cavities, where year-round ice provided natural cold storage for farmers in the days before refrigeration.

The black basalt of the Ice Springs lava flow is visible in the image above, acquired on July 12, 2022, by the Operational Land Imager-2 (OLI-2) on Landsat 9. Soil and vegetation have not yet taken hold on these young rocks. The last lava flowed from the Ice Springs vent about 700 years ago, making the jagged basaltic lava the newest rock in Utah.

A total of about 700 million cubic yards (540 million cubic meters) of lava have erupted here from four cinder cone volcanoes, for which the area is also known as The Cinders.

The 17-square-mile (45-square-kilometer) Ice Springs lava flow erupted onto older lava flows, which erupted on the shores and under the surface of ancient Lake Bonneville. A precursor to the Great Salt Lake, Lake Bonneville occupied basins in northeastern Nevada, western Utah and southeastern Idaho in the late Pleistocene Epoch, from 25,000 to 10,000 years ago. At its greatest extent, the lake was up to 1,000 feet (300 meters) deep and covered about 20,000 square miles (52,000 square kilometers).

The darker brown areas in the image are older lava flows, along with the sediments deposited atop them when they sat at the bottom of Lake Bonneville. In some places, the contact between the younger and older lava flows appears almost linear; this is where the lava flowed up against a fault scarp. The lightest brown areas are more recent sand dunes.

One of the cinder cones, Red Dome, is the site of Utah’s largest open-pit lava-rock mine. Lava, cinder, pumice and scoria rock have been mined here since the 1930s for use in landscaping, road construction, the manufacture of cinder blocks and cement, and to line BBQ grills and fish tanks.