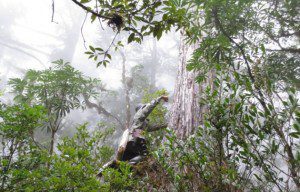 Data from more than 400,000 hectares of surveyed forest were used to produce a planetary tree count. (Credit: David Zeleny)

According to a tally by an international team of scientists, there are roughly 3 trillion trees on Earth—more than seven times the number previously estimated. The study also finds that approximately 15 billion trees are cut down each year; since the onset of agriculture about 12,000 years ago, the number of trees worldwide has dropped by 46 percent.

“The scale of human impact is astonishing,” said Thomas Crowther, an ecologist now at the Netherlands Institute of Ecology who led the study while at Yale University. “We expected humans would have a prominent role, but I didn’t expect that it would come out as the strongest control on tree density.”

The previously accepted estimate, about 400 billion, was based mostly on satellite imagery. Although remote imaging reveals a lot about where forests are, it doesn’t provide the same level of resolution as a person counting trunks.

Crowther and colleagues merged these approaches by gathering data for every continent except Antarctica from various existing ground-based counts, which allowed them to improve tree-density estimates from satellite imagery. Then researchers applied those density estimates to areas that lack good ground inventories. For example, survey data from forests in Canada and northern Europe were used to revise estimates from satellite imagery for similar forests in remote parts of Russia.

Improved population estimates could help resource managers weigh the economic benefits that forests provide in terms of water purification, soil conservation and other functions against those of harvesting or clearing trees for farmland, says ecosystems-services ecologist Becky Chaplin-Kramer of Stanford University.