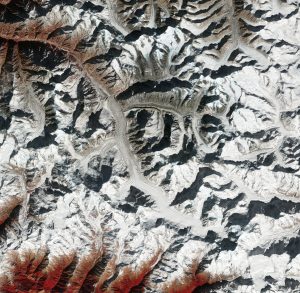 The Gangotri Glacier is in the Indian Himalayan state of Uttarakhand. The head of the glacier can be seen in the lower-right of the image near the Chaukhamba Peak. From here, Gangotri flows around 30 kilometers northwest, but, like many of the world's glaciers, it is in retreat. Studies suggest that Gangotri has been receding for well more than 200 years. Measurements have shown that it retreated by as much as 35 meters a year between the mid-1950s and mid-1970s. Although this has now reduced to about 10 meters a year, observations show that the glacier is thinning.

The glacier's terminus is called Gomukh, which means mouth of a cow, presumed to describe what the snout of this huge glacier once resembled. Importantly, the headwaters of the Bhagirathi River form here. In Hindu culture and mythology, this is considered to be the source of the Ganges and consequently the destination for many spiritual pilgrimages and treks. Gomukh is a 20-kilometer trek from the village of Gangotri, which is in the top left of the image. While Gomukh and Gangotri have much spiritual significance, the Bhagirathi River offers an important supply of freshwater as well as power as it passes through a number of power stations, including the Tehri hydroelectric complex 200 kilometers downstream (not pictured).