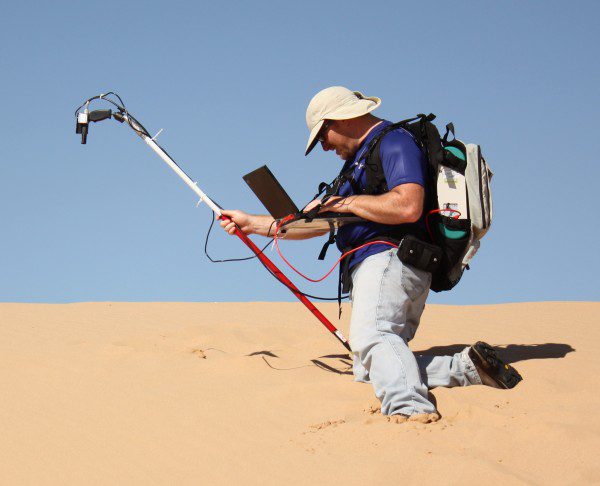 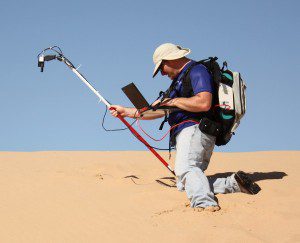 At the Algodones Dunes in southeastern California, SDSU imaging engineer Larry Leigh measures the light being reflected from this stable calibration site, so these readings can be compared to satellite-based measurements. He will use a Google Earth research award to look for more sites that can be used to calibrate Earth-imaging satellites.

Satellites, such as Landsat, measure the amount of energy reflected from Earth, but engineers must routinely calibrate them to ensure the images they transmit are accurate, Leigh explained. He will search for absolute calibration sites, remote places where the surface properties and therefore the energy readings don’t change over time.

“We’ve always wanted to do an exhaustive search of the entire planet,” notes Leigh. However, not all images are readily available through U.S. Geological Survey Center for Earth Resources Observation and Science (EROS) in Baltic, S.D., and this intensive computational process has, thus far, been beyond the capacity of the SDSU image-processing laboratory.

Through this research award, Leigh will have direct access to Google’s archives, including EROS images, and cloud computing via the Google Earth Engine.

Two master’s students will work on the project. A computer-science graduate student will help develop the interface with the Google servers, and an electrical-engineering graduate student in remote sensing will analyze the output.

Most of the absolute calibration sites are in North Africa, which Leigh described as “bright sites that were easy to find visually.” He hopes to find more stable sites, particularly those that are darker than the deserts and dry salt-lake beds now in use.

“Having that dynamic range is useful, giving a better handle on how the satellite is performing across its entire operating range,” Leigh said. Most satellites are calibrated about every 16 days; however, the discovery of more sites may make daily calibration possible, he noted.

In addition, Google’s venture into the satellite business may open other opportunities for the two entities to collaborate. “Both sides are looking ahead,” Leigh added.