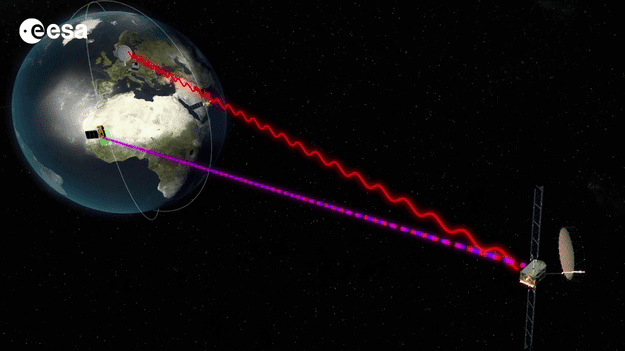 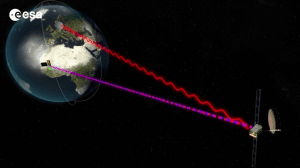 The Optical Communication Terminal is one of four Technology Demonstration Payloads carried by Alphasat. It relays Earth-observation data from low-Earth orbit (LEO) to geostationary orbit (GEO) through laser transmission. A Ka-band transmitter then forwards the data to a ground station. (Credit: ESA)

On Aug. 5, 2015, the European Space Agency (ESA) announced it has successfully conducted 100 high-speed laser links between its Sentinel-1A radar Earth-observation satellite in low-Earth orbit and the AlphaSat satellite in geostationary orbit.

The tests offered further confirmation of the basic soundness of a technology the 22-nation ESA is trying to develop into a commercial business in a partnership co-funded with Airbus Defence and Space. For the moment, the effort is being slowed not by the technical performance of the laser communications, but by delays in the launch of geostationary satellites carrying the laser terminals.

The agency said communications since testing began in November 2014 have been established using as little as 1.1 watts of power, with up to 1.8 gigabits per second of Sentinel-1A synthetic aperture radar data delivered to AlphaSat at a distance of up to 48,000 kilometers.