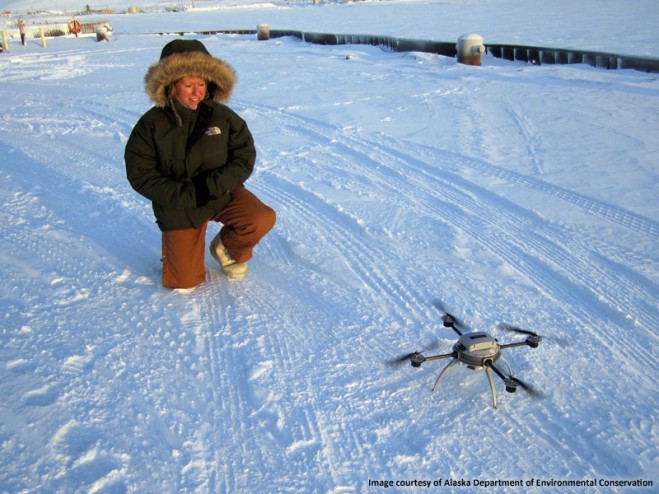 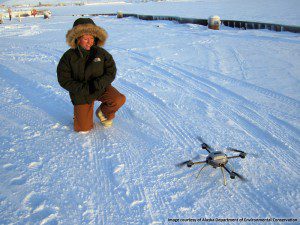 Weighing under three pounds, the Aeryon Scout micro-UAV is designed to be flown by someone with only a few minutes of training through simple point-and-click map-based navigation and automated flight safety features.

Operating under an Emergency Certificate of Authorization (COA) from the Federal Aviation Association (FAA), University of Alaska Fairbanks Geophysical Institute researchers are using an Aeryon Labs Scout drone to prepare for the arrival of the U.S. Coast Guard icebreaker Healy and the Russian tanker Renda, carrying vital fuel supplies to the remote community of Nome, Alaska.

Researchers are using aerial images and video from the Scout to determine daily ice conditions, including the formation of pressure ridges—potentially dangerous obstacles formed when two ice surfaces push together. These images are being used by the research team on the ice and are being sent to the ships as they advance toward Nome.

The nature of the mission, remote location and harsh environmental conditions called for use of an unmanned aerial vehicle (UAV) rather than manned aircraft.  The fuel delivery mission is occurring as the region is experiencing extreme winter weather, and many local communities have already received more snowfall than is typical for the entire winter.  The Alaska coast has been slammed with a series of storms with high winds and temperatures below -20 degrees F.   Use of the Scout removes the human element and allows researchers to perform their important task from a safe distance.

Greg Walker, manager at the Geophysical Institute’s Poker Flat Research Range and his team are using two Aeryon Scouts on loan from BP Alaska, who also recently demonstrated use of the Scout for oil spill response in Alaska in July 2011. The University of Alaska Fairbanks responded to an urgent request from the Alaska Department of Environmental Conservation whose representatives had attended the oil spill demonstration and requested the Scout for use in the Nome operation.

“The Aeryon Scout is designed for exactly this type of role and environment—deploying quickly to provide an aerial perspective in any location and in any weather,” said Dave Kroetsch, president of Aeryon Labs. “The fact is the Scout operates reliably in wind and weather conditions when many other small UAVs simply cannot fly.”

Currently the U.S. Coast Guard icebreaker Healy and the Russian fuel tanker Renda are continuing their journey to Nome. However, when the Renda arrives it will have to enter the harbor to unload fuel on its own, as it is too shallow for the Healy. The Aeryon Scout is expected to stay on-station, relaying images to coordinators on the ground and on the Renda.

The Scout is currently operating in Nome under an emergency Unmanned Aircraft SystemCOAgranted to the University of Alaska Fairbanks by the FAA—one of only a handful of emergency COAs issued for civilian use.  An emergencyCOAgrants clearance for immediate use of an unmanned aerial system (UAS) in conditions of distress or urgency when there is the extreme possibility of loss of life, safe manned flight is not possible and whereby the UAS is already operating under an existingCOA. The FAA is expected to publish updated UAS regulations imminently, broadening use of UAS over U.S. skies under its UAS initiative.

Weighing under three pounds, the Aeryon Scout micro-UAV is designed to be flown by someone with only a few minutes of training, through simple point-and-click map-based navigation and automated flight safety features. From a small case or backpack, the Scout can be assembled in seconds without tools and operates in extreme weather and environments due to its ruggedization, weather sealing and unmatched flight performance.