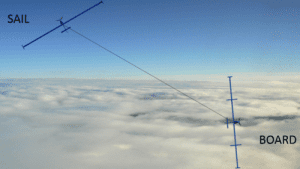 The Dual-Aircraft Platform is a concept for a low-cost atmospheric satellite that uses wind shear as the primary energy source. It was one of 15 finalists for a NASA Innovation Advanced Concepts program, Phase I award.

NASA awarded an engineering team at Embry-Riddle's Daytona Beach campus a $100,000 grant to develop a concept for an unmanned aircraft to be powered by renewable energy (wind or solar) and fly at 50,000-60,000 feet. The atmospheric satellite concept was chosen as one of 15 winning projects from hundreds of entries for a NASA Innovation Advanced Concepts program, Phase I award.

The Dual-Aircraft Platform (DAP) is a configuration of two gliders connected by a strong cable. The configuration is likened to kite surfing, as one of the aircraft acts as a sail and the other as a board. The two aircraft are positioned at different altitudes, as far as 3,000 feet apart, to encounter substantially different wind velocities. Each aircraft extracts additional energy via solar film and possibly a wind turbine to operate the avionics, flight controls, payload and intermittent use of propulsion.

Aircraft platforms that could stay stationary in the stratosphere for years, referred to as atmospheric satellites, represent a long-standing, grand challenge to the aeronautics community, and have enormous potential for societal and economic impact, said William Engblom, professor of Mechanical Engineering and Aerospace Engineering at Embry-Riddle. Such platforms would diversify and expand observational capabilities and communications bandwidth and availability in underserved remote areas of the United States, at a fraction of the cost of orbital satellite networks.