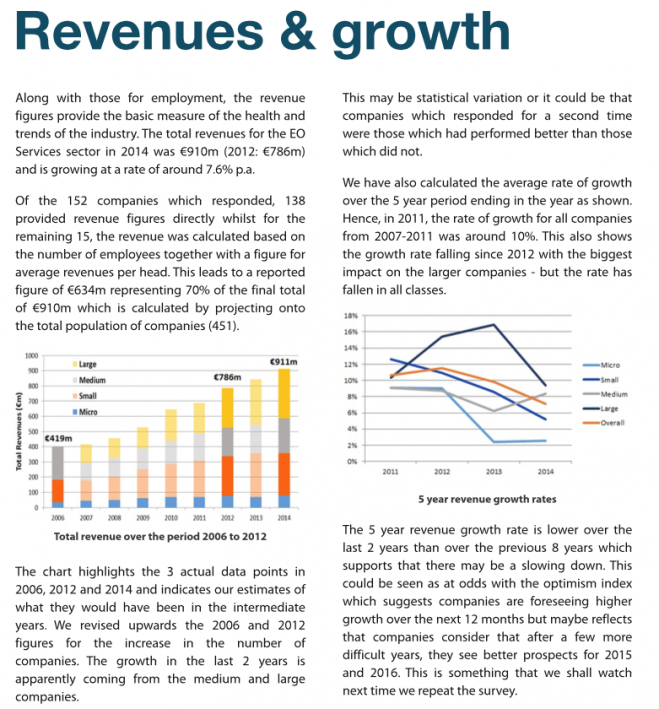 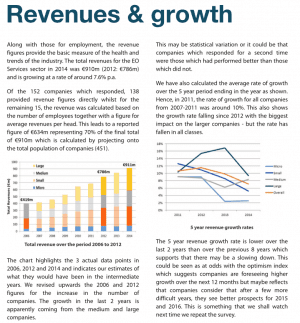 An EARSC survey of the European Earth-observation market noted that growth rates have decreased in the last two years, compared to the previous eight, and this may be a sign of an industry slowing down.

A pair of Earth-observation industry market reports were published almost simultaneously in September 2015, and both were optimistic as to the current and future states of satellite-based remote sensing.

The European Association of Remote Sensing Companies (EARSC) released “A Survey into the State and Health of the European EO Services Industry.” According to the survey, there are 451 European companies active in the industry, up from 389 in 2012, and 193 in 2006. Total revenue was estimated at €910 million, up from €786 million in 2012, with a growth rate of about 7.6 percent.

According to the report: “This is a critical time for the industry, with a great deal of change happening in and around the sector; new low-cost satellites are being launched by startup companies, and several significant acquisitions have occurred, suggesting that M&A activity may increase. Against this background, the European Union flagship programme Copernicus is committing over €7 billion investment into the sector, leading to new satellites, data sources and commercial relationships.” 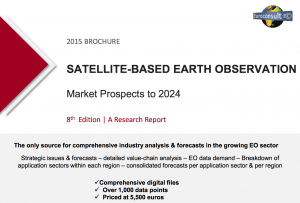 Concurrently, Euroconsult published the eighth edition of its broader report, “Satellite-Based Earth Observation: Market Prospects to 2024,” noting that more than 400 civil and commercial Earth-observation satellites are expected to be launched during the next decade, with an estimated revenue of $39 billion. In addition, more than 1,200 small satellites (less than 50 kilograms) are expected to be launched to develop cubesat constellations, adding to the overall data supply.