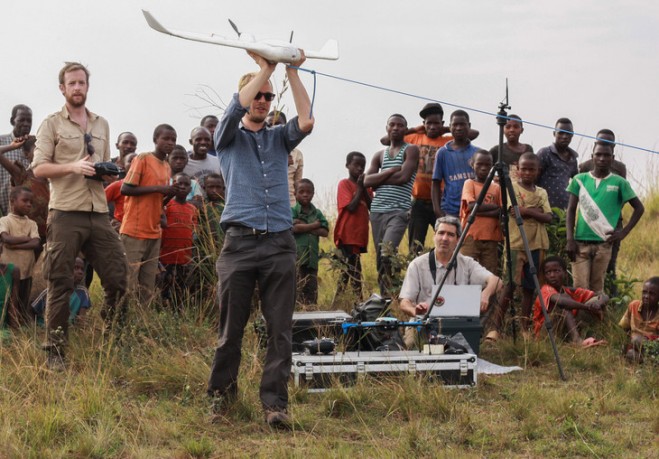 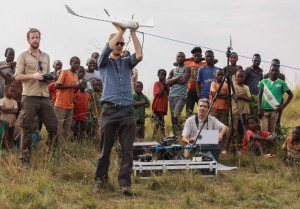 ConservationDrones team member Sander van Andel prepares to launch a drone in Tanzania. When the drone is launched, an accelerometer triggers the motor to start. (Credit: Lilian Pintea)

Ecologist Jeff Kerby is using Unmanned Aircraft Systems (UASs), or drones, to count chimpanzee nests and monitor their habitat in Tanzania’s Ugalla Forest. Such counts typically are performed on foot, but UASs allowed researchers to cover a much larger area at reduced time and cost.

For his research, Kerby prefers the airplane-style UAS to a multi-rotor drone for logistical reasons.

“The quad-copters can’t fly for as long, because they have four engines, and they’re always using battery power for lift in addition to steering,” noted Kerby.

Each drone carries a GPS, a motor and a small programmable camera that can take photographs at specific time intervals or be linked to the GPS to capture enough overlap between photographs to make a continuous map.

In addition to counting chimpanzee nests, Kerby and colleagues from ConservationDrones also monitored forest regeneration and the effects of erosion control near the chimp reserve.

“People are generally very curious when they see me operating a drone, and it’s fun to show them how it works,” added Kerby.

Kerby soon will move on to new projects, both for conservation efforts and his own research.

“I’m going to keep using drones,” he said. “Not as a drones-for-drones-sake kind of thing, but it’s going to be a part of my toolbox that I absolutely use wherever I go. And I’m going to continue to try to spread the word and help educate people about using drones for good.”