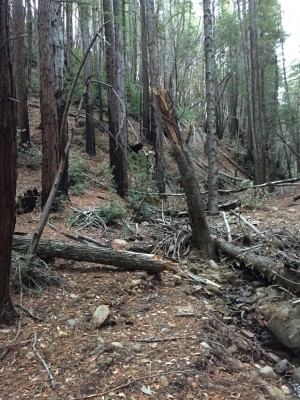 A 2015 photo shows severely burned areas from the Summit Fire of 2008 that were detected by NASA satellite images. Note the extensive new vegetation regrowth around the charred tree trunks. (Credit: NASA)

According to aerial surveys conducted by the U.S. Forest Service in summer 2015, the recent California drought resulted in millions of dead trees, mainly in the state's Sierra Nevada mountain regions. NASA researchers found that years of California's drought conditions, however, have not slowed the regrowth of tree and shrub cover in some areas burned by wildfires.

A newly published study in the April 2016 issue of the Open Journal of Forestry, written by scientists at NASA's Ames Research Center, used NASA and the U.S. Geological Survey's Landsat satellite images from the last three decades to show that forests and woodlands in the Santa Cruz mountains near San Jose and Silicon Valley suffered little or no detectable loss of trees during the past several years.

The data we're seeing are phenomenal and show nature's ability to recover from a disaster and repair itself, said NASA Ames research scientist Christopher Potter. We thought we'd see very different results, namely some forest dieback due to three recent years of exceptional drought, but we were surprised at these new findings for the mountains west of the San Francisco Bay.

Results showed that the historic drought conditions in 2013-2015 did not slow the growth of forests in Santa Cruz Mountain hill slopes, nor they did result in a detectable death of trees, as occurred widely in the southern Sierra region around Yosemite and Kings Canyon National Parks.

Not all forests respond the same to similar environmental conditions, such as extreme drought, Potter said. These forests near the Santa Cruz coast were not hit as hard in 2014 and 2015 by drought as those in the Sierra Nevada Mountains. Also, there is a good deal of low chaparral shrub cover in the Santa Cruz Mountains, which is a plant type evolved to recover quickly from fires by re-sprouting from their burn-resistant roots.