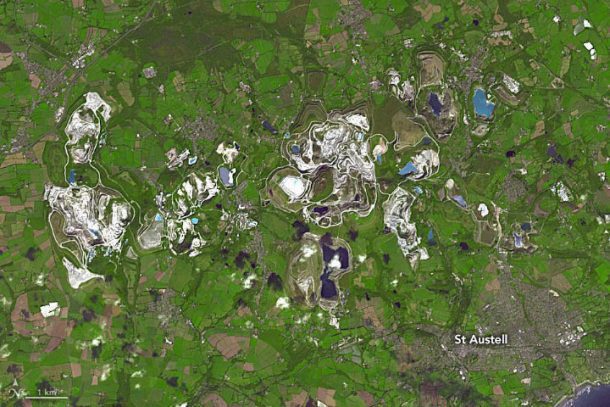 The English porcelain industry began with the 1745 discovery of kaolinite, or china clay, at Tregonning Hill, Cornwall. By the early 19th century, the Cornish deposits were the largest known to the world. By 1910, Cornwall was producing 50 percent of the world's china clay. The mines produced a million metric tons of clay each year, exporting 75 percent of it. Domestically, the clay was used to produce Wedgwood, Spode and Minton china.

Prior to the discovery of a U.K. source for the clay, the earthenware and stoneware made by the British pottery industry was prone to cracking, often when exposed to temperature changes. The addition of kaolinite produced porcelain that was both more delicate and more durable. Today, some of the U.K. deposits are still being mined, but many others have been abandoned in favor of other sources of clay, mainly from Brazil.

The accompanying image shows the clay pits northwest of St Austell. It was acquired by the Advanced Spaceborne Thermal Emission and Reflection Radiometer (ASTER) aboard the Terra satellite. Note that the image is synthetic natural color, combining several different spectral ranges to simulate the look of natural color. Some colors may appear slightly brighter than they would in an aerial photograph.