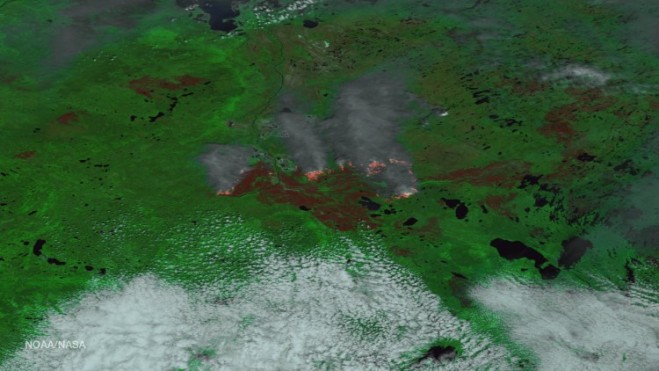 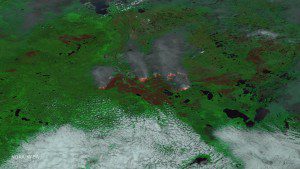 An enhanced image taken by NASA’s Suomi NPP satellite on May 24, 2016, uses multiple channels on its VIIRS instrument, including visible and thermal imagery, to distinguish cloud, smoke, land and areas of active fires. (Credit: NOAA/NASA)

The Alberta Ministry of Agriculture and Forestry reports that the Fort McMurray wildfire is now estimated to be more than 522,892 hectares in size (1,292,094 acres—an area larger than the state of Rhode Island). There are currently 1,267 wildland firefighters, 57 helicopters and 186 pieces of heavy equipment being used to battle the blaze, with more regularly arriving. The province planned to add an additional 1,000 firefighters in late May and early June.

For the most-recent Fort McMurray Fire updates, visit The Alberta Ministry of Agriculture and Forestry.

In addition, with huge amounts of smoke billowing into the atmosphere, the air quality around the region remains very poor. The Alberta Health Services issued warnings as areas have recorded a Health Quality Index of 10+ (very high risk of triggering health issues). Real-time air-quality data and information is available at www.environment.alberta.ca/apps/aqhi/aqhi.aspx.