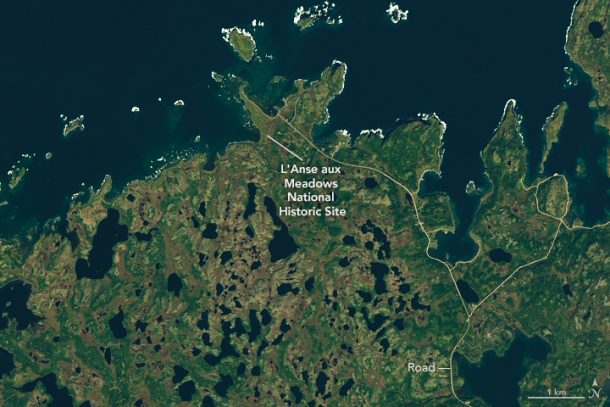 Since the 1960s, archaeologists have been gathering physical evidence that Norse people landed and settled for at least a few years in far northern Newfoundland, Canada, long before Columbus sailed to the Americas. At L'Anse aux Meadows, the Vikings constructed housing and workshops of timber and sod, and left behind food, tools and bits of building material that scientists have been analyzing. But exactly when were they there? The latest answer comes from the Sun and its electromagnetic relationship to Earth.

Using clues from literature and history”such as tales of Vinland from Norse sagas”and from radiocarbon dating of wood and bone fragments, researchers previously estimated that the Vikings were frequent visitors or settlers at L'Anse aux Meadows between 970 and 1030 CE. Many researchers suggested they lived there three to 10 years, with one team claiming it may have been as long as one hundred years.

In a new study published in October 2021, scientists found that the Vikings were in L'Anse aux Meadows in 1021, exactly 1,000 years ago. Led by scientists from the University of Groningen and Parks Canada, the team used geochemical dating techniques to analyze wood fragments and nail down the precise year the trees were cut down near the site.