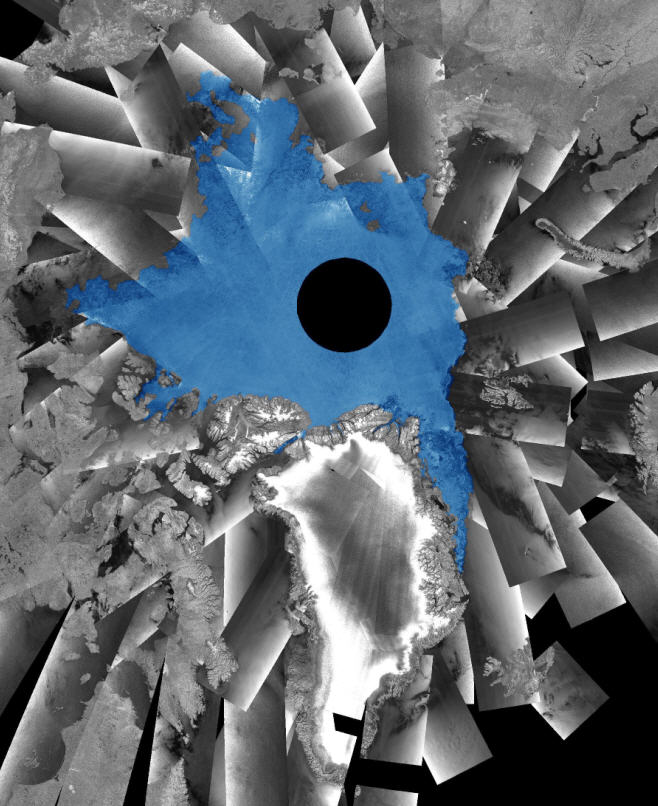 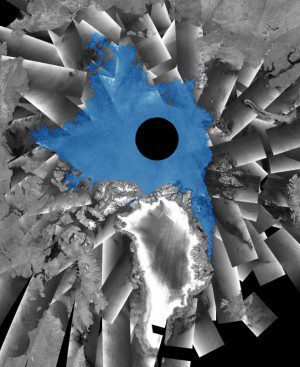 This mosaic of Envisat radar images was acquired Sept. 9-11, 2011, over the Arctic Ocean. The sea ice extent highlighted in blue corresponds to the areas where more than 80 percent of the sea surface is covered by ice.

The results are remarkable: Since 2002, the sea surface in an area of the Arctic Ocean has risen by about 15 cm, and the volume of fresh water has increased by some 8,000 cubic km—around 10 percent of all the fresh water in the Arctic Ocean. A change in wind direction could cause the water to spill into the north Atlantic, cooling Europe.

Researchers from the Centre for Polar Observation and Modelling (CPOM) at University College London and the United Kingdom’s National Oceanography Centre used data from the European Space Agency’s ERS-2 and Envisat satellites to measure sea-surface height over the western Arctic from 1995 to 2010.

The results were published last week in the online version of the scientific journal, Nature Geoscience. The scientists conclude that the dome could be a result of strong Arctic winds accelerating a large ocean circulation known as the Beaufort Gyre, causing the sea surface to bulge.

A change in the direction of the wind would cause the fresh water to spill into the rest of the Arctic Ocean and even reach the north Atlantic. This could slow a key ocean current, stemming from the Gulf Stream, and subsequently cool Europe. This current keeps the continent relatively mild compared with other areas at similar latitudes.

“When we looked at our data on a year-to-year basis, we noticed that the changes in the sea surface height did not always follow what the wind was doing, so we thought about reasons why this might happen,” said Katharine Giles, CPOM research fellow and lead author of the study. “One idea is that sea ice forms a barrier between the atmosphere and the ocean. So as the sea ice cover changes, the effect of the wind on the ocean might also change.

“Our next step is to look into how changes in the sea ice cover might affect the coupling between the atmosphere and the ocean in more detail to see if we can confirm this idea.”

Sea ice can be measured by different types of satellite data. Radar altimeters on satellites such as the two used in the study, Envisat andERS-2, can be particularly useful when observing inaccessible areas like the Arctic.

Envisat, the largest Earth observation satellite ever built, will mark 10 years in orbit in March. ERS-2 was retired in July 2011, but 20 years of data from it and predecessor ERS-1 on oceans, land, ice and atmosphere will continue to be used by scientists for years to come.

“We were able to produce the Beaufort Gyre results thanks to the overlap of the ERS-2 and Envisat missions and long-term satellite data availability,” said Seymour Laxon, director of CPOM and co-author of the paper.

ESA will continue to monitor the Arctic with the upcoming Sentinel series of Earth-observing satellites for Europe’s Global Monitoring for Environment and Security program.

Later this year, the first results of seasonal changes in sea-ice thickness from data acquired by ESA’s CryoSat-2 satellite will be presented.