The image highlights the damage caused by the fire at Notre Dame Cathedral that started April 15.

Hundreds of radar images from the two identical Copernicus Sentinel-1 satellites, spanning 2016 to 2018 and over the same area, have been compressed into a single image. 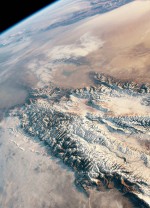 Snow and Sand in Central Asia

The Tien Shan (or Tian Shan) is one of the longest continuous mountain ranges in the world, stretching across 1,500 miles (2,500 kilometers) in northwest China, Kazakhstan and Kyrgyzstan.

A Proba-V satellite view shows the internationally protected, volcanic archipelago of the Galápagos and its surrounding marine reserve.

The explosion unleashed an estimated 173 kilotons of energy—more than 10 times the energy of the atomic bomb blast over Hiroshima during World War II.

In the wake of an intense winter storm, historic floods have broken out across the central United States.

This photograph, taken a short hike from the Geographic South Pole in Antarctica, shows some of the antennas comprising the Super Dual Auroral Radar Network (SuperDARN) array. 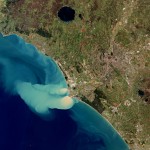 The Copernicus Sentinel-2B satellite captured this true-color image on Feb. 5, 2019, just three days after heavy rainfall in Rome and the surrounding area of Lazio, Italy. 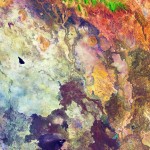 The northeast Kenya region tends to be very arid, and this false-color image from the Copernicus Sentinel-2A satellite has been processed to highlight different types of rock, soil and sand in pinks, purples and yellows.