An Inside Look at Hurricane Dorian

A new view of Hurricane Dorian shows the layers of the storm, as seen by an experimental NASA weather satellite that's the size of a cereal box. 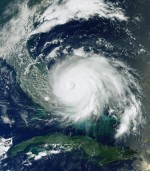 This Copernicus Sentinel-3 image features Hurricane Dorian as it pummels the Bahamas on Sept. 2, 2019.

New data from NASA’s Atmospheric Infrared Sounder (AIRS) instrument aboard the Aqua satellite shows the movement high in the atmosphere of carbon monoxide associated with fires in the Amazon region of Brazil.

This image shows spiraling cloud patterns off the coast of Morocco on July 19, 2019.

The second satellite to join the constellation that forms the European Data Relay System (EDRS) was successfully launched on Aug. 6, 2019, onboard an Ariane 5 rocket from Europe’s Spaceport in Kourou, French Guiana.

In late July 2019, a major melting event spread across the Greenland Ice Sheet. Billions of tons of meltwater streamed into the Atlantic Ocean throughout the month, making a direct and immediate contribution to sea-level rise.

Hundreds of wildfires have broken out in Siberia, some of which can be seen in this image captured from space on July 28, 2019.

The Copernicus Sentinel-2 mission takes us over palm oil plantations in East Kalimantan, the Indonesian part of the island Borneo. 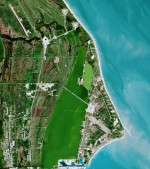 Celebrating 50 years since Apollo 11 blasted off with the first humans that would walk on the Moon, Copernicus Sentinel-2 captures the historic launch site at Kennedy Space Center, Cape Canaveral, Fla. 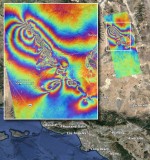 Damage from two strong earthquakes that rattled Southern California on July 4 and July 5—magnitude 6.4 and 7.1, respectively—can be seen from space.