Images of Earth from space meet fashion as Vogue magazine currently features the “Fragility and Beauty” exhibition in Milan, Italy.

The Copernicus Sentinel-1 mission takes us over cracks in the Brunt ice shelf, which lies in the Weddell Sea sector of Antarctica.

The Copernicus Sentinel-2 mission takes us over the Leelanau Peninsula on the northwest coast of Northern Michigan.

As evacuation orders lifted and the Saddleridge Fire continued to be contained by the Los Angeles Fire Department, the Geospatial Intelligence Center (GIC) began flying aircraft over the impacted areas, collecting high-resolution aerial images of the damaged structures. 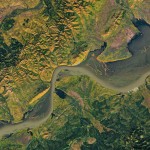 Autumn Along the Amur

The Operational Land Imager on Landsat 8 acquired this image on Sept. 30, 2019, showing the river as autumn foliage paints its banks yellow and orange.

An astronaut onboard the International Space Station shot this photograph of smoke-filled canyons.

Dubbed D28, the iceberg is around 1,600 square kilometers—about the size of Greater London.

The Copernicus Sentinel-2 mission takes us over Clarence Strait, a narrow body of water in Australia’s Northern Territory. 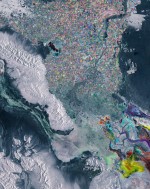 This Copernicus Sentinel-1 image takes us just south of the U.S. border, to the region of Baja California in northwest Mexico. Its capital city, Mexicali, is visible top left of the image.