Qarman CubeSat: Falling into a Fireball

While typical space missions resist orbital decay, Qarman will drift down month by month until it reenters the atmosphere, at which point it will gather a wealth of data on the fiery physics of reentry.

An astronaut on the International Space Station took this oblique photograph of the Maiella Massif, which stands amidst Italy’s Central Apennine Mountains.

This Copernicus Sentinel-2 image takes us over Lake George, in western Uganda. In 1988, Lake George was designated as Uganda’s first Ramsar site, given its importance as a center for biological diversity.

This Copernicus Sentinel-2 image features an area in the Santa Cruz Department of Bolivia, where part of the tropical dry forest has been cleared for agricultural use.

In the northern Mexican state of Cohuilla lies the Cuatro Cienegas Basin. Dotting the landscape are small pools, formed by natural springs, in which are found live stromatolites. 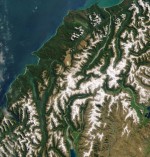 Carried by the wind, dust and ash particles from Australia have painted some glaciers in New Zealand with a brown-orange tint.

The Copernicus Sentinel-2 mission takes us over the green algae blooms swirling around the Baltic Sea.

Elephant seals are tagged as part of a French research program called SO-MEMO (Observing System - Mammals as Samplers of the Ocean Environment) operated by the French National Center for Scientific Research (CNRS).

The Copernicus Sentinel-2 mission takes us over Lake St. Clair, forming the border between Ontario, Canada, to the east, and Michigan to the west.

Accented by dramatic shadows, this photograph shows canyons and prominent topography around Comb Ridge, as observed by an astronaut aboard the International Space Station (ISS).