The Aquarius mission is painting a picture of ocean salinity—the amount of dissolved salt in the water—which is critical to many ocean aspects, ranging from climate to the global water cycle. 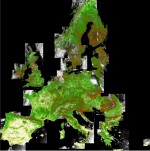 The European Union’s Global Monitoring for Environment and Security program already is feeling the loss of Envisat, adding further urgency to launch the planned Sentinel mission.

Sending Drones into the Eye of the Storm