For the second year in a row, the cooler sister to El Niño showed up at the winter party in the Eastern Pacific.

A Seasonal Emerald in the Sahel

Depending on the abundance and timing of rainfall upstream, the inland delta of the Niger River in Mali typically floods with water from roughly August to December.

Since the 1960s, archaeologists have been gathering physical evidence that Norse people landed and settled for at least a few years in far northern Newfoundland, Canada, long before Columbus sailed to the Americas.

Constructed in 1938, the refugee shelters were built to protect the local population from air strikes by the Italian Air Force and Franco forces.

The United Launch Alliance (ULA) Atlas V rocket with the Landsat 9 satellite onboard launched on Monday, Sept. 27, 2021, from Space Launch Complex 3 at Vandenberg Space Force Base in California.

Oil tends to smooth out the bumps on the ocean’s surface, which results in a distinct radar signal that the Delta-X mission was able to pick out of their data. 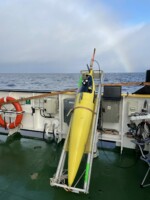 Roaming the Depths: The Role of Autonomous Assets in the EXPORTS Campaign

Satellites have undoubtedly opened up new ways for scientists to study the ocean, giving us global coverage of the surface of the ocean without ever having to step foot on a ship. But how can we learn what lies beneath the surface? The classic way oceanographers study the ocean is, of course, going there. But