With some places recording air temperatures of more than 40°C (104°F), much of Europe is in the grip of a heatwave that set record highs for June.

On the morning of June 22, 2019, astronauts shot this photograph of the volcanic plume rising in a narrow column and then spreading out in a part of the plume known as the umbrella region. 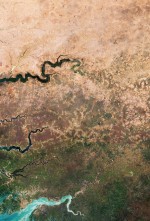 Captured by the Copernicus Sentinel-2 mission, this image shows the edge of the dry desert in west Africa contrasted with vegetated land.

This is a map of the entire sky in X-rays recorded by NASA’s Neutron star Interior Composition Explorer (NICER), a payload on the International Space Station.

Our oceans and the complex "conveyer belt" system of currents that connects them play an important role in regulating global climate.

In recent years, Greenland has been losing more ice through the Jakobshavn Glacier than from anywhere else on this huge ice sheet.

The Wide View of a Shrinking Glacier

Pine Island Glacier is one of many outlet glaciers around the perimeter of Antarctica, but observations have shown that this glacier is worth extra attention. 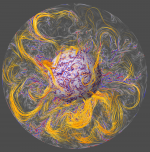 Simulation of the Magnetic Field in Earth’s Core

Earth’s core as modelled in the numerical geodynamo simulation as part of research into geomagnetic jerks and rapid hydromagnetic waves.

The Copernicus Sentinel-2 mission collected this image over Australia’s northeast state of Queensland, where a large amount of sediment is visible gushing into the Coral Sea, close to the Great Barrier Reef lagoon.