Redlands, California—February 23, 2016—Vricon, a leading provider of photo-realistic 3D mapping products and digital elevation models for the defense and security industries, is now a member of the Esri Partner Network. Vricon's partnership with Esri, the market leader in geographic information system (GIS) software, will help drive the growth and adoption of new technologies for

Hexagon AB, a leading global provider of information technologies that drive productivity and quality across geospatial and industrial enterprise applications, today announced the acquisition of SigmaSpace Corporation, a provider of next-generation technologies used to rapidly deliver high-quality 3D maps of the Earth. Today, accurate and geo-referenced 3D visualisations have become an absolute necessity in real-world

December 15, 2015 — 3D laser Mapping, global providers of 3D mapping and monitoring solutions have moved their UK headquarters to new offices, keeping up with the continual expansion of the company. This is the third move since the company began, in 1999. Located just a 5 minute walk from their previous building in Bingham,

August 5, 2015 — The Routescene® proposition to transform the approach to surveys across the world is taking hold. Collaborating with Hanseatic Aviation Solutions we have jointly developed an integrated ﬁxed-wing Unmanned Aerial Vehicle (UAV) and LidarPod® solution, which we believe is the ﬁrst commercially available product in the world. Following in-depth customer research, we

May 6, 2015 — Teledyne Optech is pleased to announce the CMS V500, a complete redesign of its highly popular Cavity Monitoring System that introduces a live video feed, cable-free operation, and other critical new features that improve safety and efficiency in underground mining. With hundreds of units sold, the Optech CMS has been the 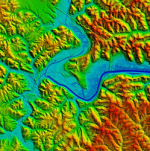 Feb.17, 2015—Routescene are excited to announce that we will be showcasing our new 3D LiDAR mapping solution for the first time in the USA. We will be based at booth 65 at the ILMF event in Denver, Colorado, from the 23rd to the 25th of February 2015. The Routescene LidarPod®, a complete self-contained turnkey solution