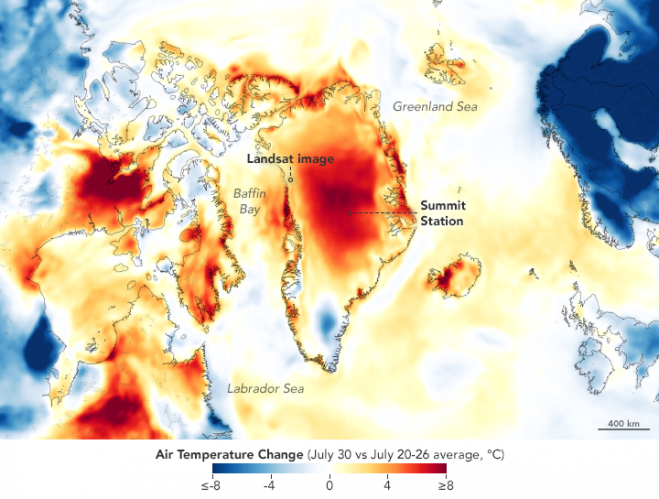 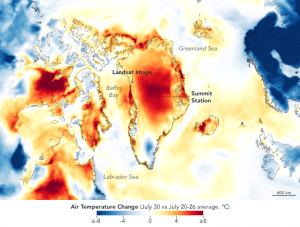 In late July 2019, a major melting event spread across the Greenland Ice Sheet. Billions of tons of meltwater streamed into the Atlantic Ocean throughout the month, making a direct and immediate contribution to sea-level rise.

The melting was provoked by a bubble of warm air that moved over Greenland after delivering unseasonably warm temperatures to Europe. This map shows the short-term temperature anomaly over Greenland; it depicts how much the air temperature on July 30, 2019, was above or below the average for the previous week (July 20 to July 26). Note how the central part of the ice sheet is bathed in warm air.

The map was derived from the Goddard Earth Observing System (GEOS) model and represents air temperatures at 2 meters (about 6.5 feet) above the ground. The GEOS-5 model, like all weather and climate models, uses mathematical equations that represent physical processes (like precipitation and cloud processes) to calculate what the atmosphere will do. Actual measurements of physical properties, like temperature, moisture and winds, are routinely folded into the model to keep the simulation as close to measured reality as possible. Modeled data offer a broad, estimated view of a region where ground-based weather stations are sparse.

The melt events in July 2012 and July 2019 followed a similar pattern, in which the main event was preceded by a warm day that didn’t quite reach the freezing point, and followed by a day of cooling. The difference is that in 2019, the main melt event spanned two days, with a few hours of melt also occurring on July 31.