September 11, 2018
Trouble Brewing in the Atlantic 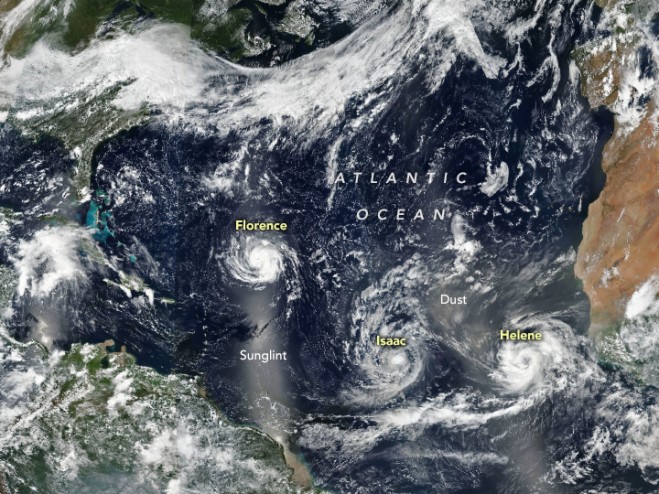 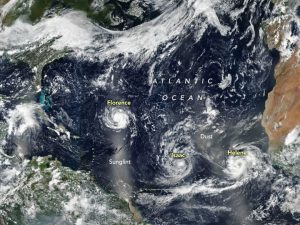 The Atlantic basin was relatively quiet for much of August 2018, but September brought a surge in storm activity. On Sept. 9, 2018, Florence, Isaac and Helene were all churning up the North Atlantic. The trio of storms is visible in this image acquired by the Visible Infrared Imaging Radiometer Suite (VIIRS) on the Suomi NPP satellite.

Category 4 Hurricane Florence was the most ominous for people in the United States. Forecasters at the National Hurricane Center expect the slow-moving storm to reach the coast of the Carolinas on September 12 or 13, bringing a life-threatening storm surge, exceptionally heavy inland rains and damaging winds. Though weakening, Category 1 Hurricane Isaac is on a path to cross the Lesser Antilles islands and move into the eastern Caribbean Sea on September 13. Category 2 Hurricane Helene was strengthening, but is expected to veer northward into the open ocean.

The bright strips in the image are reflected sunlight, or “glint,” which can show up over ocean areas in the middle of each orbit.