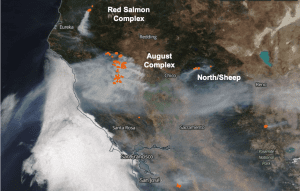 Wildfires have been burning across the state of California for weeks”some of them becoming larger complexes as different fires merge. One of those was the August Complex Fire, which reportedly began as 37 distinct fires caused by lightning strikes in northern California on Aug. 17, 2020. That fire is still burning over a month later.

The August Complex Fire and others this fire season have been sending far-reaching plumes of wildfire smoke into the atmosphere that worsen air quality in California and beyond. Predicting where that smoke will travel and how bad the air will be downwind is a challenge, but Earth-observing satellites can help. Included among them are NASA's Terra and CALIPSO satellites, and the joint NASA-National Oceanic and Atmospheric Association (NOAA) Suomi NPP satellite. Together, the instruments on these satellites provide glimpses at the smoke over time, which can help improve air quality predictions.

The satellite instruments have the advantage of providing broad coverage and consistent measurement accuracy over time, as well as making their observations without any risk to the people taking the data, said Ralph Kahn, a senior research scientist with the Earth Sciences Division at NASA's Goddard Space Flight Center in Greenbelt, Md., who studies aerosols. Kahn and other atmospheric scientists at NASA collect data about the fires from Earth-observing satellites used to improve models that predict how wildfire smoke will affect air quality downwind of the fires.

One of the instruments on NASA's Terra satellite is the Multi-angle Imaging Spectroradiometer (MISR), which has nine different cameras pointing toward Earth at different angles. As Terra passed over the August Complex Fire on Aug. 31, MISR collected snapshots of the smoke plume from different angles.

Scientists look at those different perspectives to calculate the extent and height of the smoke plume downwind, as well as the height nearest the source of the fire, called the injection height. That information is essential for determining how far the smoke will travel.

Smoke tends to stay aloft longer, travel farther and have a larger environmental impact, perhaps far downwind, if it's injected higher into the atmosphere, said Kahn.

On Aug. 31, the highest parts of the plume from the August Complex Fire reached approximately 2.5 miles (4 kilometers) into the air”putting it above the boundary layer of the atmosphere, which is the layer of the atmosphere nearest to the Earth's surface. The fresh smoke plume extended at least 30 miles (45 kilometers) east of the burning area near Mendocino National Forest in northern California. Over the previous few days, smoke from this fire had already traveled more than 310 miles (500 kilometers) to the west and over 460 miles (750 kilometers) east of the source, crossing into Utah and out over the Pacific Ocean.

Individual wildfires and large conflagrations of merged fires burning throughout the state”and the accumulated smoke they produce”make it difficult to see the actual flaming hotspots from space. But the Moderate Resolution Imaging Spectroradiometer (MODIS) aboard NASA's Terra satellite can see the longer wavelengths of nonvisible light, or infrared radiation produced by the heat coming from actively burning wildfires. In other words, MODIS can sometimes see through smoke even when our eyes can't by comparing the higher infrared radiation from hotspots to the lower radiation coming from the surrounding area.

As it passes over the Western U.S., MODIS can see a swath about 1,430 miles (2,300 kilometers) wide”about the distance from central Utah to almost 70 miles into the Pacific Ocean”providing valuable context about what's going on with the fires and smoke over the Western U.S. MODIS pinpointed multiple clusters of fire hotspots in the August Complex Fire, which had consumed over 240,000 acres by Sept. 2.