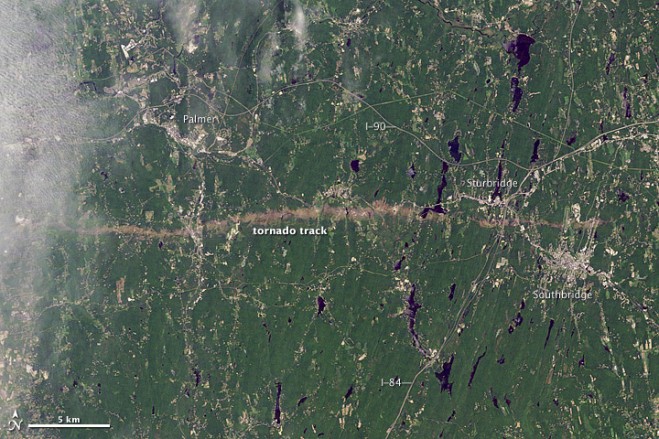 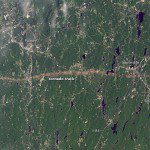 On June 1, 2011, a supercell thunderstorm developed over western Massachusetts. The storm produced an EF3 tornado that cut a 39-mile (63-kilometer) track of destruction across southwest and south-central Massachusetts. Not only did the tornado remain on the ground for many miles, but it also widened to roughly 0.5 miles (0.8 kilometers) in Brimfield State Forest.

The Thematic Mapper on the Landsat 5 satellite captured this natural-color image on June 5, 2011, showing part of the tornado track including damage in Sturbridge. According to The Boston Globe, Massachusetts state police reported a tornado on the ground and cars overturned near Interstate 84 in Sturbridge at 5:22 p.m. on June 1.

When the tornado first touched down in the Munger Hill section of Westfield, Massachusetts, damage was mostly limited to trees, the National Weather Service reported. The tornado quickly intensified, however, as it traveled to West Springfield. The Boston Globe reported that two deaths occurred in West Springfield, one death in Springfield, and another death in Brimfield. The number of people injured was unknown the day after the storm, but 33 people were known to have been injured in Springfield alone.

Deadly tornadoes are unusual but not unheard of in Massachusetts. In 1953, one of the single deadliest tornadoes in U.S. history struck Worcester, killing 94 people.