The View from the Top 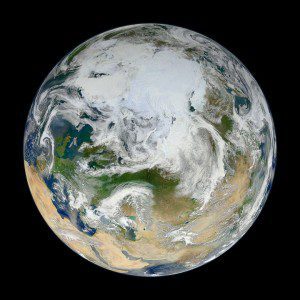 There have been many images of the full disc of Earth from space, but few have looked quite like this. Using natural-color images acquired by the recently launched Suomi-NPP satellite, ocean scientist Norman Kuring of NASA's Goddard Space Flight Center pieced together this composite image of Europe, Asia, North Africa, and the entire Arctic.

The image, created with imagery from the Visible/Infrared Imaging Radiometer Suite (VIIRS) on Suomi-NPP, was compiled from 15 satellite passes made by the satellite onMay 26, 2012. The spacecraft circles Earth from pole to pole at an altitude of 824 kilometers (512 miles), so it takes multiple passes to gather enough data to show an entire hemisphere without gaps in the view.

Kuring stitched the image swaths together, then set up this artificial view looking down from 70-degrees north, 60-degrees east. The view is artificial because the satellite doesn't see the full disc at one time. Kuring was able to show the Arctic in this image because northern hemisphere spring spreads enough sunlight over the North Pole to allow a natural-light view.