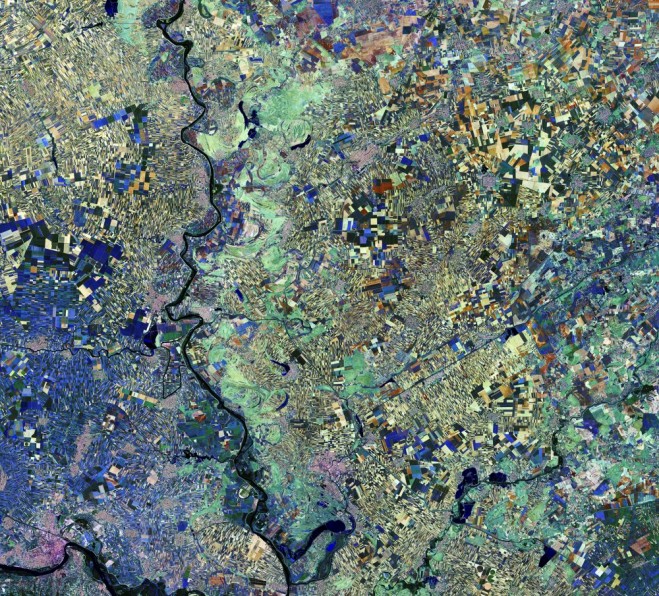 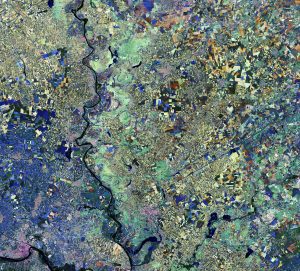 The European Space Agency (ESA) Copernicus Sentinel-2A satellite captured this image of the Vojvodina region of northern Serbia. The area lies in the southern part of a region previously covered by the Pannonian Sea from two million to 23 million years ago. Today, the land boasts a fertile soil, as evidenced by the many agricultural fields visible as geometric shapes.

The Tisza river snakes down from the north, and curved, light-green areas primarily along the east side of the river reveal its former course. Manmade waterways appear as straight black lines and likely are used for drainage, transportation and irrigation.

Sentinel-2’s main instrument has 13 spectral bands and is designed to provide false-color images that can be used to distinguish between different crop types as well as data on numerous plant features, such as active chlorophyll content and leaf water content, all of which are essential to accurately monitor plant growth.

Different colors in this image indicate varying vegetative states. For example, yellowish patches indicate soil or freshly ploughed land, while shades of blue (primarily in the lower left) indicate the same or different crops at a similar stage of growth.

One thought on “The Fertile Soils of Serbia”