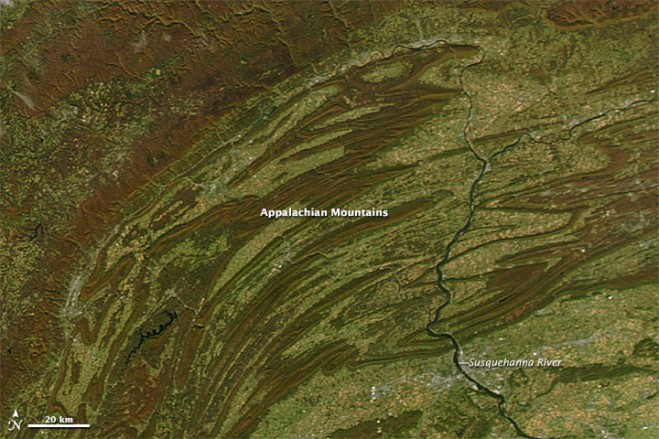 Oak-dominated forests grow in the part of Pennsylvania shown in this Oct. 21 Aqua satellite image. On lower slopes, red and white oaks mix with tuliptree, red maple and hickories. On drier upper slopes and ridge tops throughout central Pennsylvania, oak forests often are dominated by white, black and chestnut oaks.

With temperatures falling and days growing shorter in the northern hemisphere, autumn colors swept across the northeastern United States. Between mid-September and late October, forests in central Pennsylvania changed from green—with no hint of fall color—to a symphony of reds, yellows and browns. 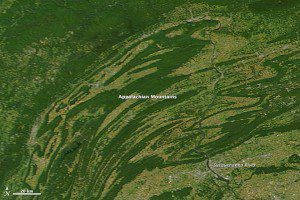 This Sept. 17 Aqua satellite image shows the same area before the transformation occurred.

NASA’s Aqua satellite captured the annual transformation in this pair of images from Oct. 21 and Sept. 17. In the October image, fall colors were at or just past their peak in central and eastern Pennsylvania. The forests along the ridgelines of the Appalachian Mountains were the most colorful.

At lower elevations, the trees still had a tinge of green. Forests once covered the entire landscape, but today the fertile valleys are filled with pink, tan and green agricultural fields. Some crops had been harvested, leaving behind golden stubble or red-brown bare earth.