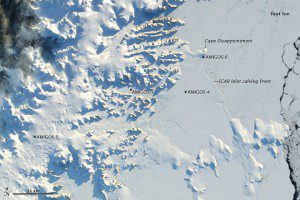 Sunny skies and westerly winds prevailed over the Antarctic Peninsula on April 24, 2012. Cloudy weather had just moved out, and temperatures rose well above freezing as the MODIS sensor on NASA's Terra satellite passed overhead and captured a natural-color image.

The relatively warm conditions on the peninsula in late April 2012 were driven in part by warm downslope winds that were channeled through valleys such as the one holding the Flask Glacier. Such winds can lead to extensive melt in the summer.

Although conditions were relatively warm on April 24, cool conditions prevailed on the Peninsula in the months preceding this image”much cooler than the conditions prior to the Larsen B Ice Shelf disintegration in 2002. The fast ice filling the area of the SCAR Inlet was evidence that conditions were cooler than normal. That ice remained in place through the austral summer of 2011“12. Meanwhile, summer melt ponds, thought to contribute to the breakup of the Larsen B Ice Shelf, were scarce from 2010 to 2012.