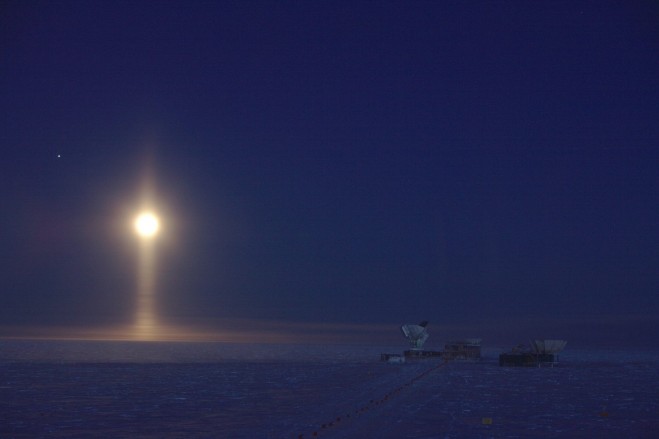 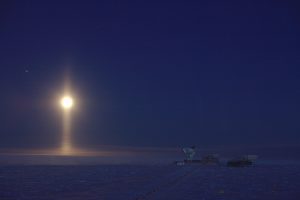 This ethereal image was taken by Daniel Michalik, currently a research fellow at the European Space Agency (ESA). It captures a beautiful scene at the Earth’s South Pole in Antarctica, where the dry, cold conditions allow for observations of a number of rare celestial phenomena that are seen far less often elsewhere. The sight captured beautifully here by Daniel is a good example of such a phenomenon: a light pillar.

The Moon illuminates a column of bright light between it and the frozen plateau below, creating a scene akin to a dramatic lunar spotlight beaming downward. This is caused by moonlight reflecting from and refracting through ice crystals suspended in our planet’s atmosphere, producing a diffuse, eerie glow. Atmospheric ice crystals are behind a number of the phenomena showcased wonderfully at the South Pole, including halos and arcs (glowing rings that encircle the Sun or Moon in the sky), as well as sun and moon dogs (bright, circular spots of light that sometimes appear along these halos around the Sun or Moon).

Jupiter can be seen as a bright spot to the upper left of the Moon. This photograph is one single long exposure with minor contrast and exposure adjustments, taken at -60°C.