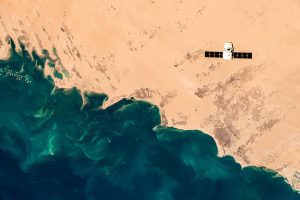 International Space Station Commander Alexander Gerst viewed SpaceX’s Dragon cargo craft chasing the orbital laboratory on Dec. 8, 2018. Gerst watched as the Dragon approached the station and took a series of photographs, saying “Hard to decide which photo of the approaching SpaceX Dragon 16 is the most stunning.”

The Dragon cargo craft contained supplies and experiments, including the Global Ecosystem Dynamics Investigation (GEDI), which will provide high-quality laser ranging observations of Earth’s forests; a small satellite deployment mechanism called SlingShot to be installed in a Northrop Grumman Cygnus spacecraft prior to its departure from the space station; and the Robotic Refueling Mission-3 (RRM3), among others.

Dragon is scheduled to depart the station in January 2019 and return to Earth with more than 4,000 pounds of research, hardware and crew supplies.