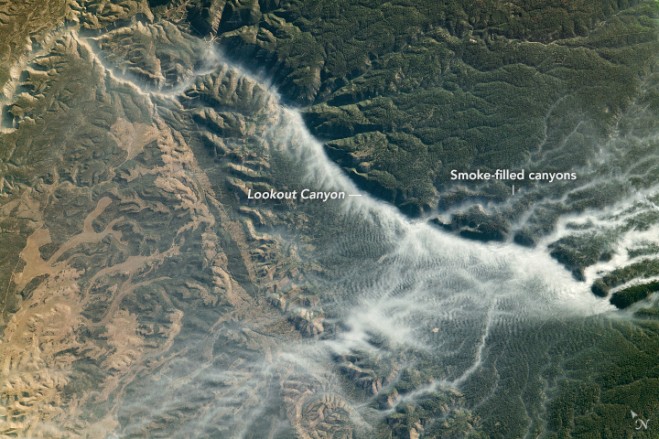 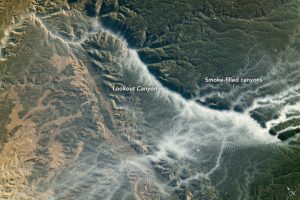 Lightning struck the Kaibab Plateau in Arizona along the northern rim of the Grand Canyon on July 12, 2019, starting a wildfire (the Castle Fire) that would eventually burn more than 19,000 acres. As it was still burning almost a month later, an astronaut onboard the International Space Station shot this photograph of smoke-filled canyons in the region.

During morning and evening hours, dense smoke often settles in low-lying areas and becomes trapped due to temperature inversions—when a layer within the lower atmosphere acts as a lid and prevents vertical mixing of the air. Steep canyon walls act as a horizontal blockade, concentrating the smoke within the deepest parts of the canyon and increasing the strength of the inversion. As the day progresses and temperatures rise, the air will usually begin to mix and the smoke will no longer be confined to the canyon.

As this image shows, without vertical mixing, the smoke from Lookout Canyon travels throughout the extensive system of side canyons, spreading the smoke to different areas near the ground, rather than dispersing upward.