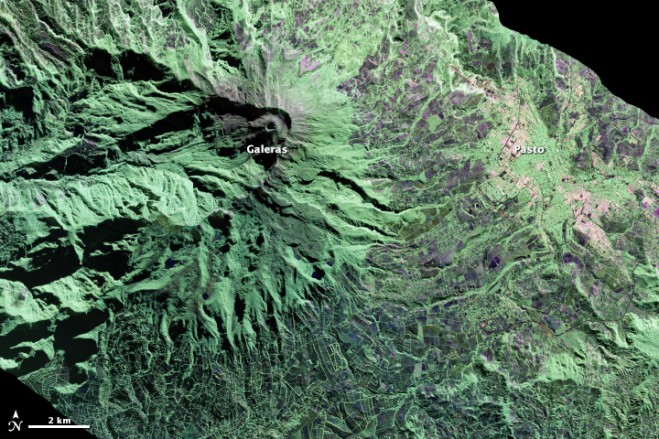 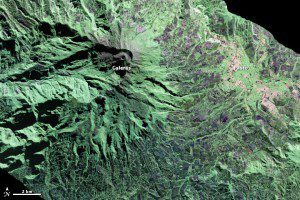 When studying volcanoes, detecting even slight movements of the land surface can tell a lot about what’s happening below. Scientists at NASA’s Jet Propulsion Laboratory have a new tool to observe such ground deformation.

The Uninhabited Aerial Vehicle Synthetic Aperture Radar (UAVSAR) sends pulses of L-band microwave energy from an aircraft-mounted sensor to the ground. Those microwave signals bounce back to the sensor and get translated into observations of land cover and topography, regardless of whether there are clouds.

UAVSAR captured the data for the accompanying false-color image on March 13, 2013, while flying on a NASA Gulfstream C-20A aircraft. The radar penetrated the tropical tree cover to detect the shape of the land surface around the Galeras volcano and the city of Pasto, Colombia. UAVSAR uses microwaves instead of visible light to make images of the land surface at a spatial resolution of 6 meters (20 feet) per pixel.

By itself, a single UAVSAR image has some utility for studying soil moisture, vegetation cover, wetlands and other landscape patterns, particularly in areas with a lot of cloud cover or dense forests. However, the real payoff for solid earth sciences comes from having two or more of these images.